Panic and misdirection on the ECB capital key

The accusation by Professor Friedrich Heinemann of the ZEW institute that the ECB’s public sector purchase programme is deviating from the eurosystem’s capital key to the benefit of Southern European states must have hurt, because a week after Mario Draghi’s press conference the ECB communications office saw fit to bring up the issue again in a longish twitter thread:

(THREAD) President Mario Draghi explained the neutrality of the ECB’s asset purchases based on the capital key at last week’s ECB press conference. Here’s a thread summarising his statement. 1/ pic.twitter.com/1t9qNdIIRe

The first question at the press conference was indeed about the ZEW study:

…you decided to keep the purchases as strictly according to the ECB capital key. But now it turns out that you are increasingly deviating from this as a new survey or a new calculation from the Centre of European Economic Research (ZEW) has claimed…

The ZEW study, as cited by Frankfurter Allgemeine, claimed basically that, while the ECB had mostly kept to the capital key in 2015, in 2017 it had purchased bonds disproportionately from highly indebted states. Purchases of German bonds had fallen under the quota, and the ECB was buying hardly any assets from the Baltic states any more. Heinemann went as far as to claim that the Italian state had become dependent on the ECB’s asset purchases for its financing needs.

In typical Draghi fashion, he came loaded with facts and figures to overwhelm the unsuspecting journalists. But, also characteristically, he misdirected by talking about Greece’s ineligibility for the public sector purchase programme PSPP, and by focusing on the relatively small deviation from the capital key for Portugal instead of the much more serious deviation for the Baltic states – notably Estonia.

The problem with the Baltic states – in particular Estonia – is that they have very small debt-to-GDP ratios. So low, in fact, that if the ECB had kept to the capital key strictly the PSPP would have hit the buffers within its first six months. That is the real deviation from the capital key, not the nonexistent monetary financing of the Italian government that is the stuff of nightmares for Frankfurter Allgemeine.

Now, since the ECB twitter account manager brought a chart to the fight, and committed several data presentation sins with it, I thought I’d make my own chart. 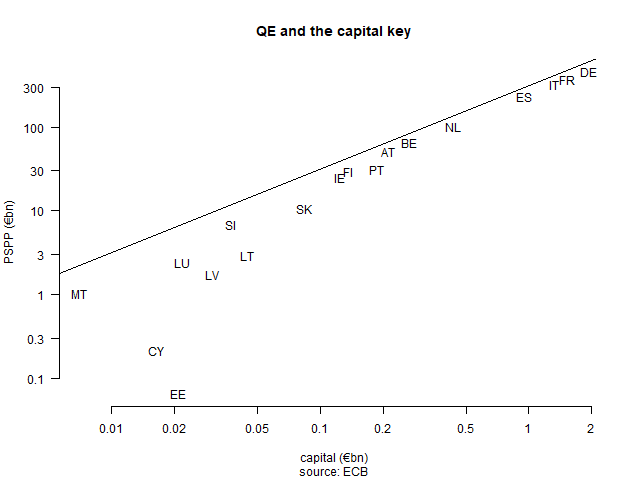 Here we can see two things. Firstly, yes, Portugal is the largest member state with a visible negative deviation from the capital key. But, secondly, the Baltic states – and Slovakia, and Cyprus – show much larger relative deviations and Draghi said nothing about them. That is the first sin in the chart the ECB tweeted: cherry-picking a couple of data points, among eighteen in this case. The second sin is using different scales for the German and Portuguese data. If you have data points of widely different sizes, the proper thing to do is to put them on a single logarithmic scale. That way equal linear differences on the chart represent equal proportional differences in the underlying data. That’s how we know at a glance that Slovakia has a larger proportional deviation from the capital key than Portugal does: its vertical distance from the line of proportionality in my chart is larger.

My chart also shows that the deviations from the capital key for Austria, Belgium, Spain Italy, and France, which so exercised Professor Heinemann, are too small to be seen with the naked eye. That’s not where the story is. The story is one of large versus small member states, and the ECB doesn’t seem to care one iota – nor should it – whether it keeps to the capital key in small states that each count for less than 2% of its capital key or its asset purchases. Just how little the smaller member states matter is borne out by what my chart would look like if I had not used logscale: the member states smaller than Portugal bunch up near the origin of the chart and become uninformative.

But in this chart, at least, the excess asset purchases for France and Italy are visible. That has to count for something.

3 thoughts on “Panic and misdirection on the ECB capital key”

Get it off your chest! Cancel reply